The Dirge of Lucas Drake

“It has been almost a millennium since the rise of Dracula, and the fall of humanity. The old Gods have abandoned the world they once served, and so began the age of eternal night and snow…”

Set in a post apocalyptic world of eternal night where vampires rule, a duo of monster hunters are sent on a job. The half-vampire Lucas Drake and his human companion Lyla are tasked with hunting down a creature terrorising a small town. Drake is prepared but is Lyla?

The ‘Pilot’ issue was made for my final major project at University co-written with my Twin Blake Farron. 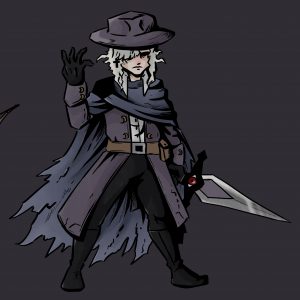